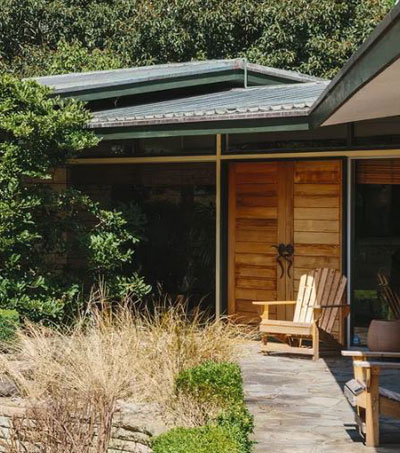 “In 2015, Tara Morton and Nick Walbridge—both public servants in New Zealand’s Ministry of Foreign Affairs and Trade—were nearing the end of several years in New York when they began looking for a house to settle in when they returned to Wellington.” Samantha Weiss Hills reports for Curbed.

“As the couple searched, Morton stumbled upon an a listing for a circa-1965 house with a California modernist sensibility and Japanese influence.”

“It was only later that Morton realized the house was located about an hour north of Wellington, in a small town called Waikanae on the Kapiti Coast.”

“It’s a town that’s notorious for [being] where all the retired people go,” said Walbridge. “Due to Waikanae’s distance from Wellington, they chalked the house up as a pipe dream,” but continued to check in on the listing anyway.

When back in New Zealand for a visit in early 2016, Walbridge “decided on a whim to look for the listing again. The house was set to be auctioned just the next day, and Walbridge attended with the intention to make an offer.”

“The home is portioned into what Walbridge and Morton refer to as three “wings”: one for living and dining, one for the bedrooms, and one for a studio.”

“Thanks to its proximity to a small river that runs alongside the property out to the beach, they call the home ‘Riverbank,’ an apt name for a place meant to evoke tranquillity,” writes Weiss Hills.