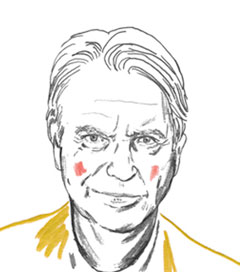 In the latest of a series of opinion pieces for British political and cultural magazine the Spectator, actor and vigneron Sam Neill argues that “actors are allowed to do other things other than act.”

“Increasingly I think perhaps my vineyards may turn out to be my life’s work,” Neill says. “In my acting life, I live in the world of the imagination; in the vineyard I plant trees, and dry stone walls are now spreading around the place. I am content.

“OK, fair enough: most actors are narcissistic, insecure, frivolous and a bit camp. But they are not stupid. And while it’s true that some are overcelebrated, it is also true that they can be simultaneously underrated. That is to say, there are those who are far more famous than is good for anyone, but at the same time too easily dismissed as lightweight. Witness the ill-disguised sneering one finds in the press whenever people like Angelina Jolie, George Clooney or Cate Blanchett lend weight to a good cause.”