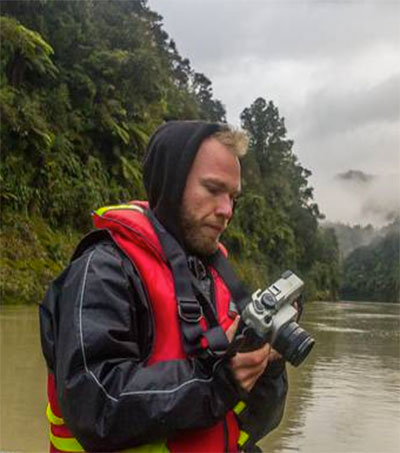 When the Whanganui River was given legal personhood Danish freelance photographer Mathias Svold was so intrigued by the headlines that he went to Washington DC in the United States to pitch a story for National Geographic magazine.

He got the assignment, the “holy grail of photography”.

Svold left Whanganui on 8 July, after spending a month here. He timed it to take in Puanga, the Māori New Year celebrations.

With the help of Mike Poa, Gail Imhoff and Chevron Hasset he was introduced to everyday life and important events on the river.

He canoed it, spent a few days at Blue Duck Station in the mid reaches, flew over it in a helicopter.

Svold looked at what happens on the river, including water sport and canoe journeys.

“It’s not a Māori story about Māori traditions and culture. It’s more general,” he said.

A writer will be chosen for the story – probably a New Zealander – and Svold may return in summer to get more photos. It could be another year before the story appears.

The story will be well read. National Geographic magazine is 130 years old and 7 million copies a month are published. It is translated into about 40 languages and read by about 60 million people.