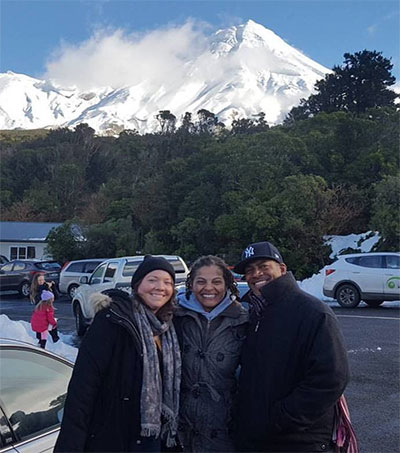 Must Do Travel Destinations in New Zealand

“This summer I took an epic vacation in New Zealand,” award-winning blogger and traveller Lia Miller (pictured centre) writes in a three-part series for the Huffington Post. “To say that New Zealand is gorgeous is an understatement. Literally everywhere I looked I saw beauty, natural beauty primarily, but also beauty in the people, the culture, the food, and the almost seamless intersection between modernity and the by gone era when most of us farmed to survive.

“After I got over the abject terror of driving on the left-hand side of the road and in a winnegbago no less, I started to get into the trip as we made our way along the coastline to the northernmost point of the North Island, Cape Reinga.

“From Hobbiton we visited the beautiful Mount Taranaki. Because New Zealand is below the equator in the southern hemisphere, it is winter time from roughly June – August and Mount Taranaki had enough snow for us to have a snowball fight and to build some mini-snowmen.

“You can ski at Mount Taranaki and there are many more walking paths and treks you can take here. [Above] is the best shot we could get of the mountain as the clouds kept obstructing our view.

“One of the highlights of the North Island for me was my experience in the Waitomo Glowworm Caves. There are several different ‘adventures’ you can take but we opted for the ‘odyssey’ tour, that means we went underground river rafting, which was pretty freaking cool.”