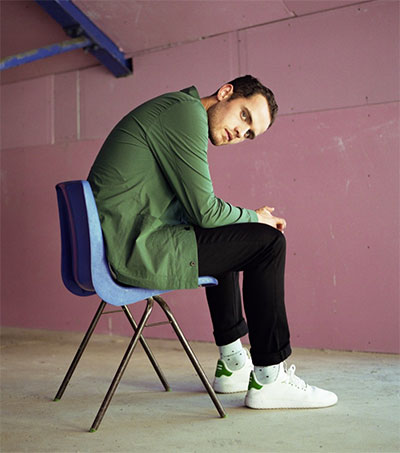 “I only moved here two and a half years ago but I’m looking to live here for the rest of my life,” he says. “All the guys that played on it are from London. It’s mainly me and my drummer that worked on it, but I’ve got a couple of other people that have jumped on it too.”

A freeflowing record, Wallflower recalls the point in the early 90s where hip-hop’s dynamic flow intersected with the sheer unpredictability of jazz. Rhythmically flexible, Rakei’s songwriting is forever looking to delve a little deeper.

A fresh, vivid experience, Wallflower also benefits from Rakei’s ties to London’s club culture. An electronic producer on the side, he has released material under a pseudonym Dan Kye on none-more-cool Peckham imprint Rhythm Section, helmed by the redoubtable figure of Bradley Zero.

“Bradley was the first person I met when I moved to London,” he recalls. “I went down to one of his nights to see what was happening in South London, and I fell in love with it straight away, and that’s how I got into making music like that as well.”

The transition from studio to live has pushed Rakei still further, with the solitary songwriting process pushed into the cohesive chemistry of a live band. “What’s interesting is that since there’s heavy layers of production on the album trying to find ways to re-create that live has been fairly challenging. We’ve been rehearsing these past few weeks and it’s sounding really cool. It’s like we have to re-write the album.”

It’s a huge challenge, but given that Rakei, 25, has already crossed halfway round the world it’s something he relishes.

Rakei is currently playing sold out shows throughout Europe. On 31 October he is in Amsterdam at the Melkweg.