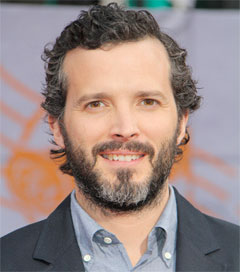 Having worked on the 2011 film The Muppets (winning an Oscar for his soul-searching power ballad Man or Muppet), 37-year-old New Zealander Bret McKenzie was signed up for the follow-up, a crime caper called Muppets Most Wanted, which is released this month.

“The last film was a walk down memory lane,” McKenzie says, “this one is a little edgier and the songs are more self-aware and less nostalgic.”

For a funny man with a guitar, McKenzie takes his music very seriously. He talks earnestly about the challenges of writing for Miss Piggy’s limited range (she is played by a man) and the thrill of masterminding her duet with Celine Dion.

“Miss Piggy is brilliant but Celine takes it through the roof,” he says.

To those aware of his ­pre-Muppets career, McKenzie’s involvement in the films is a surprise; warm-hearted, PG-rated ditties haven’t always been his speciality.

Born in Wellington, he grew up convinced he would be a ballet dancer – “I had a bit of a Billy Elliot childhood … without the labour conflict going on in the background”.

In 2004, McKenzie and his Flight of the Conchords co-star Jemaine Clement were spotted by an HBO talent scout and went on to make two impeccable seasons of a self-titled television show, which followed their fictional and utterly feckless attempts to crack New York’s music and dating scenes. Critics and fans lapped up the show’s self-effacing gags.

Next on McKenzie’s carefully curated agenda is tidying up his scripts for an animated television series about a remote Nasa outpost, and a live-action musical fairy-tale film. He and Clement have also (very loosely) discussed a Flight of the Conchords film and tour of Japan.