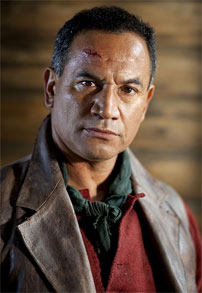 Morrison Heads for the Hills

Temuera Morrison stars as Maori seafarer Kereama in the colonial, “pretty much your classic Western,” Tracker, which is reviewed by The Independent. “It is ostensibly the story of a manhunt: Kereama is falsely accused of murder and, aware of the rough justice awaiting him, heads for the mountains. Rotorua-born Morrison stars opposite Ray Winstone, the tracker, who is recruited to track the seafarer. Harvey Harrison’s photography creates a mesmerising spectacle of New Zealand’s rivers and valleys. Morrison offers a nice ironic counterpoint to [Winstone’s] dourness. Two dramatic killer twists are the bonus in a movie that puts an intriguing new spin on old colonial misadventures.” Four stars. The Guardian’s reviewer Xan Brooks is less enthusiastic, describing the direction as “tame” and the plot “well-trodden.” However, Brooks credits the scenery as “glorious” and says “Winstone and Morrison put some swing in its step.”