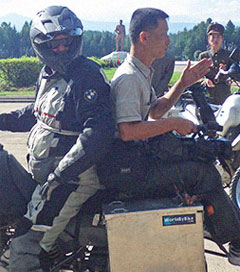 New Zealanders Gareth and Joanne Morgan have become the first people to motorbike across the Korean Peninsula and say they have some real insights to share, especially regarding the terrain, people and bureaucratic process they’ve witnessed.

The Morgans entered the North on 16 August, crossing the Tumen River from Russia. They are expected to complete their journey in two weeks, having travelled 5500 miles before ending at South Korea’s Mt. Halla on Jeju Island.

In North Korea, the couple were met by a North Korean delegation, as well as their countryman Roger Shepherd, who has carved out his own niche climbing mountains on both sides of the DMZ.

Gareth said that the North Korean government was very supportive of their trip throughout its duration, and believes that this is because they look the inter-Korean bike trip as a way of improving relations.

The Morgans are convinced that the North not only granted their request for the trip, but suggested the DMZ as an entryway because they want better ties with the South.

“Absolutely, there’s no doubt about it,” Gareth said. “Both of the countries have Ministries of Reunifications …They are brothers and sisters.”

Gareth Morgan is an economist and philanthropist. He is the owner of Wellington’s Phoenix Football Club.