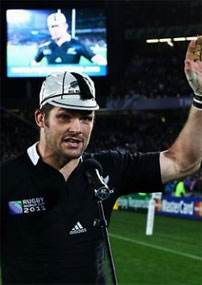 Milestone Made at Eden Park

“After being awarded a special commemorative cap for becoming the first man to reach 100 All Black caps, captain Richie McCaw told over 60,000 fans at Eden Park that now French demons have been laid to rest, the William Webb Ellis trophy is next,” the Telegraph’s Oliver Pickup wrote after New Zealand won over Les Bleus 37-17. “The 30-year-old led his forwards into battle against the French, who had proved something of a bogey side in recent World Cup history, and they won. Reflecting on his achievement of bringing his personal ton up, the Crusaders flanker said: ‘I’m pretty lost for words, to be honest. To reach a milestone like that … You never want to put personal achievements ahead of the team, but to do it in front of your home crowd, at the World Cup, playing the French — I couldn’t think of anything better.’” McCaw’s debut international test was against Ireland at Lansdowne Road on 17 November 2001. He was born in Oamaru.