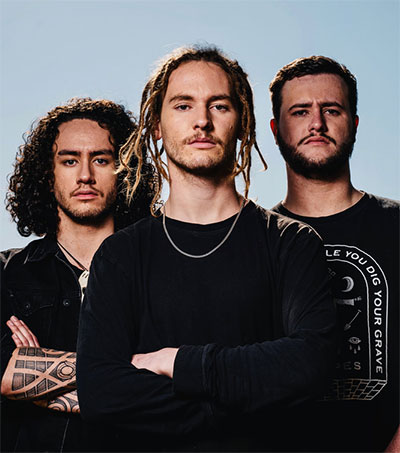 Metal Heroes Alien Weaponry on the Up

Alien Weaponry are part way through a tour of their homeland, New Zealand, Eleanor Goodman reports for UK heavy metal magazine, Metal Hammer. The run of dates is called the Level One Tour, named after the country’s lowest, and current, Covid Alert Level. According to Goodman, the trio is “heading up a wave of new global metal”.

Last February, they had their biggest-ever home show at the 2000-capacity Auckland Town Hall – no mean feat in a country that has a small population relative to its land mass. In autumn, they announced a management deal with Rick Sales Entertainment Group, which looks after the heavyweight likes of Slayer, Gojira and Mastodon. It’s fair to say they’re on the up, Goodman writes.

Mixing English and te reo Māori vocals with groove metal, they not only sing about their own lives, but of historic battles fought by Māori people and the injustices of colonisation.

“I feel like there’s this general interest in us because of the fact that it’s not something that people have really heard before,” drummer Henry de Jong explains. “Of course there’s been lots of similarities drawn with Sepultura, who sing in Portuguese, and there are definitely bands that have mixed their native language and stories with metal. But I feel like we’re doing our own thing with it.”