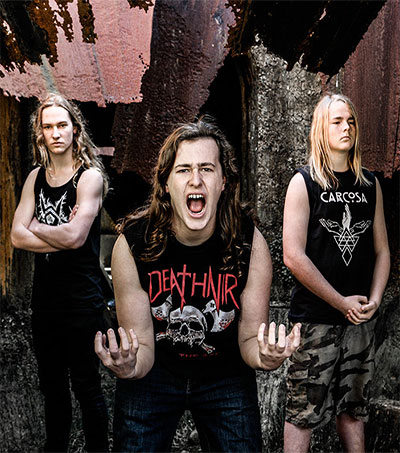 The Maioha Award, which recognises exceptional waiata featuring te reo Maori, was given for their heavy metal anthem Raupatu.

Alien Weaponry has reached hundreds of thousands of fans with their hit song Ru ana te Whenua which has surpassed a million views on Facebook and YouTube.

The band is composed of brothers Henry, 17, and Lewis de Jong, 15, along with their friend Ethan Trenbath, 15.

“Metal is always super-political with its lyrics and there are a lot of Maori that are into metal, and it’s kind of weird for us to be the first ones to do it,” he said.

Both the de Jong brothers attended Kura Kaupapa as younger children and have incorporated their haka skills into their performances.

Ru ana te Whenua is a song about the New Zealand land wars in the late 1800s.

The de Jong boys are direct descendants of Te Ahoaho – a warrior who died in the battle at Pukehinahina, Gate Pa – and the song is a story passed down to them by their father about their ancestors’ plight defending their lands against British troops.