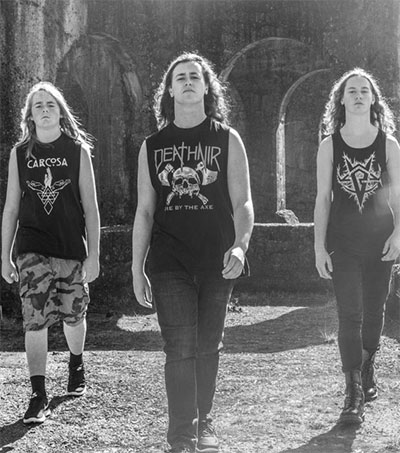 Three teenagers from the tiny Northland town of Waipu have managed to capture imaginations with their unique thrash metal sound and commanding live performances.

Now, Alien Weaponry is ready to release their furious debut album Tū on the world. Short for “Tūmatauenga,” the Maori god of war, “Tū” also means to stand strong and proud, and to stand for something. The notion is reflected in the album artwork, which includes the traditional moko kanohi of the Maori warrior.

Austrian label Napalm Records released the single and video for the song “Holding My Breath” – the first single so far to be sung entirely in English. The song was written by Lewis de Jong (vocals/guitar). In it, he talks about the anxiety of being judged and socially ostracised by peers to the point of being unable to function.

“It’s about something that actually happened to me. I felt so bad that I literally stayed in my room and couldn’t bring myself to leave the house or talk to anyone,” de Jong says. “I wrote the song at that time, and it was one of the things that helped me work through it, so I hope it will resonate with other people going through similar things.”

Tū is out on 1 June. In July, the band heads to Europe for a three-month tour, which includes the world’s biggest metal festival, Wacken Open Air in northern Germany.