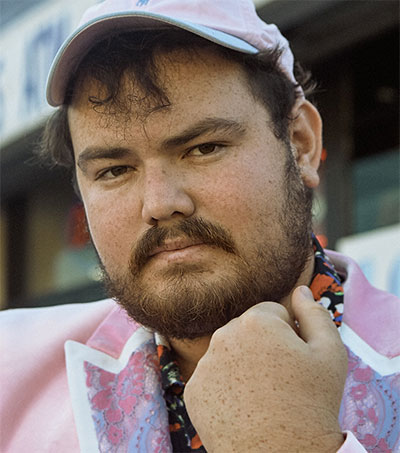 There’s something about Saint Lane that’s impossible to ignore, according to GQ Australia which features the New Zealand-born, Gold Coast-based rapper who has dropped a total of three tracks to date – a discography that might feel too premature to write about, were it any other artist.

But like we said, Saint Lane isn’t any old artist, GQ’s Joey Fenaughty writes. His debut tracks Compliment My Shirt and Sugary Sweet pulse with urgency and promise, the storytelling and production they bring together is the kind of stuff rap nerds can’t possibly listen to without taking mental notes.

Even his first Soundcloud demo, Zip Code, was way more advanced than SoundCloud demos should be. With a cool Bollywood-esque hook offsetting Lane’s unapologetic lyricism, it showed the artist knows how to flirt with elements of pop while staying true to his rap roots.

But you can’t have structure without a story, and Lane’s got plenty of yarns to tell. Brushes with homelessness, competing career callings and a fractured family bleed into the music he’s already given us, and the material that’s yet to come.

If we didn’t interview Saint Lane now, we might as well kiss goodbye to the wave he’s currently riding, as it’s not about to crash or plateau anytime soon. The names that make up his entourage are indicative of this: Billie Eilish collaborator Jory Lee Cordy, Anthony Sylvester (the director behind a number of Yaeji and Channel Tres music videos) and Noname producer Danny Duke Perez are just a few of the hip-hop royals this young rapper is aligning himself with.

“It’s surreal. My first ever show overseas was, like, the biggest music festival in Asia!” Lane tells the magazine.

“When I listen to rap I’m studying it, like, what makes this so good? When I listen to music for leisure I chuck on like neo-soul. ‘Cause I can just admire it,” he says.

Saint Lane is originally from Auckland.