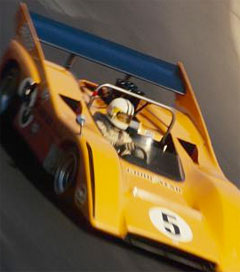 “The design and manufacture may have been rudimentary by modern-day standards – the first McLaren racing car was put together in a rented shed with a mud floor – but winning meant just as much to [New Zealander] Bruce McLaren and his team of six as it does to the 500 employees creating F1 cars that continue to carry his name,” Maurice Hamilton writes for The Times. “The formation of Bruce McLaren Motor Racing Ltd in September 1963 was as inevitable as a handful of keen young mechanics being willing to join the adventure. It was a measure of not only McLaren’s potential as a winning constructor and driver but also his status as a thoroughly decent man who led by example.” McLaren: 50 Years of Racing by Maurice Hamilton is out in the UK in September.