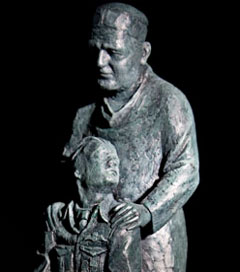 The design for a memorial honouring pioneering plastic surgeon, Dunedin-born Sir Archibald McIndoe, the hundreds of Second World War air crew whom he rescued from despair, and the town of East Grinstead crucial in their rehabilitation, has been unveiled in the town. The maquette shows one of the “Guinea Pigs”, as they became known, a badly burned airman looking upwards to the skies where he will never fly again, and towards McIndoe, whose hands are placed reassuringly on his shoulders. McIndoe lived and worked in the town from 1939 until his death aged 59 in 1960. Sculptor Martin Jennings, who’s father was one of McIndoe’s patients, said: “McIndoe’s patients always refer in their memories of him to his absolute certainty that they would go on to lead productive lives despite the traumas they’d suffered.”