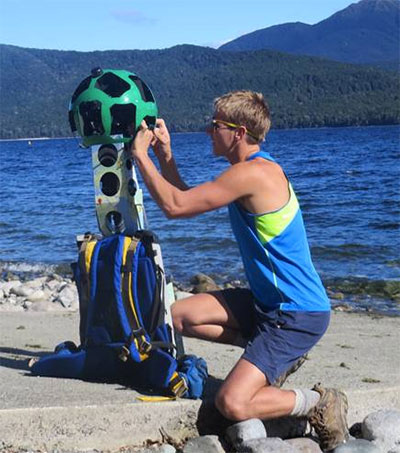 Aucklander Matt Jenke has helped put some of the country’s top tramping tracks on the Google map, completing seven of the nine Great Walks wearing a Google Street View Trekker, a wearable backpack outfitted with 360-degree cameras designed for locations accessible only by foot.

The Trekker includes 15 lenses that take photos every 2.5 seconds, and the project has taken four years to complete.

360-degree panoramic views of New Zealand’s best known and most popular walking trails – Milford, Kepler, Abel Tasman, Waikaremoana, Heaphy, Routeburn and Rakiura/Stewart Island tracks – have been launched globally on the Google Maps platform so that anyone can now take a virtual “tramp” through the wilderness.

“The thing that makes these walks unique to New Zealand is the vast difference in each track,” Jenke said. “In Abel Tasman you walk along a golden sand beach with sun shining and if you’re lucky you can spot seals bathing on the rocks. Now on the other end of the scale you could be on the top of Conical Hill on the Routeburn Track with snow at your feet.”

The launch puts the Great Walks alongside other famous natural attractions that have also been captured by Google Trekker including the Grand Canyon, Galapagos Islands and Mt Fuji. Along with armchair walkers, prospective hikers the world over can now get a taste of New Zealand’s most iconic landscapes before they tackle the tracks themselves.

Jenke will have a 10th walk to complete in 2018 with the opening of the Pike29 Memorial Track on the West Coast of the South Island. The 45km walk is to be constructed through the Paparoa National Park, which will be extended by 3971ha.

“For New Zealand to offer these variations of wilderness and nature is pretty special,” Jenke said.