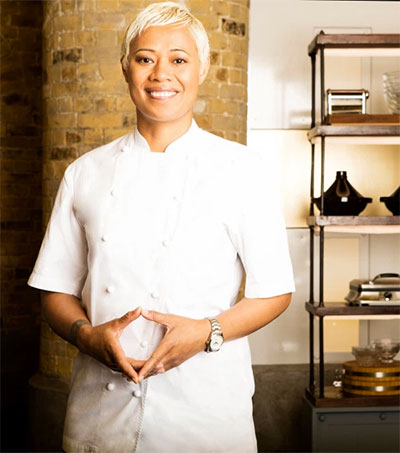 There are 48 cooks taking on the challenge of impressing fearsome judges Monica Galetti and Marcus Wareing as MasterChef: The Professionals returns to BBC Two – but there’s only one woman in the line-up in this week’s series opener. Galetti tells the Sun why.

“Men think: ‘It can’t be that hard, I’m going to put myself up and make an a**e of myself,’ whereas women are more like: ‘No, I don’t fancy looking like a jerk on television,’” the 41-year-old New Zealander says.

“There are a lot of very talented female chefs out there, but I believe they haven’t all come on the show because women are more cautious than men.”

However, for those professional cooks who do brave the forthright comments of Wareing and Galetti, the rewards can make it well worth it.

“The chefs who have won this show have their own restaurants, they write books,” Galetti adds.

Their success not only as chefs – Galetti’s first restaurant Mere opens in London in January; Michelin-starred Wareing has released five cookbooks and owns three London restaurants – but also now as television personalities means the duo have become household names.