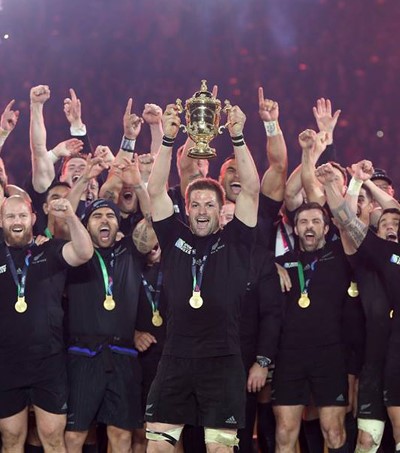 The New Zealand All Blacks have beaten Australia’s Wallabies 34-17 in the Rugby World Cup final at Twickenham with a magnificent performance. With their back-to-back World Cup wins they have become the first team to retain the William Web Ellis Cup.

“From the opening of the match it was clear New Zealand were primed, tactically and physically, were at the peak of their game” while “the Wallabies looked slightly off the pace in the first half in particular, and only really threatened the defensive line of New Zealand while there was a player off the field,” as reported in The Roar.

The All Blacks put on a masterclass in the first half and with 70% of the possession the pressure they put on the Wallabies was immense.

“There’s no doubt the All Blacks were deserving winners. Their speed of play, ferocity in contact and tactical nous saw them run out deserving winners,” according to the article in The Roar.

“In a testament to the astuteness of their performance, retiring All Black Dan Carter was awarded the man of the match award, in a fitting end to one of the greatest careers in rugby history.”