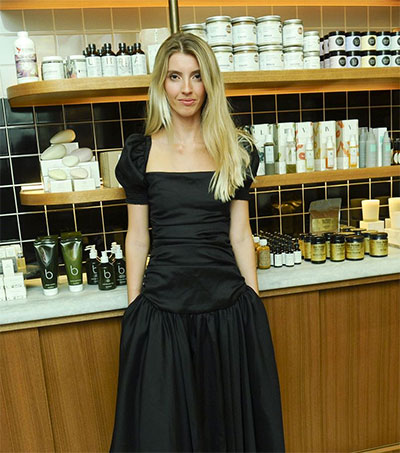 New Zealander Maggie Marilyn Hewitt’s story reads like a corny cartoon bildungsroman, Ellie Pithers reports for British Vogue. It goes like this: Fashion-obsessed teenager from pipsqueak, middle-of-nowhere town thousands of miles away from a major fashion capital dreams of making it big. She goes to college. Hones her aesthetic. Meets big-time fashion buyer from major retailer at Fashion Week. Buyer picks up her fledgling label on the spot. The best part? People buy her clothes. In volume. That includes Karlie Kloss and Kendall Jenner.

At 23, Hewitt – sunny, enthusiastic, excited – is adjusting to her status as “the next big thing”. “It’s pretty surreal,” she says.

Net-A-Porter – the aforementioned retailer who discovered her work at Sydney Fashion Week in May 2016 – had never picked up a first season collection in its history.

Hewitt was born in the coastal town of Kerikeri, population: 7000. She read Vogue from a young age and credits her mother as “a beautiful dresser”, but even so was “pretty removed from the fashion industry”, growing up on a farm surrounded by animals and wide open space. Her parochial upbringing was compounded by geographical isolation.

“We are pretty isolated from the rest of the world, but I like that we have an outsider perspective,” is Hewitt’s take on its topography.

The biggest challenge, as for any young designer who has met with success early on, is not to overreach. “I’m trying to find a way to grow with the brand, so it’s not growing faster than I can grow,” she says. Still, in one year the brand has grown by an astonishing 980 per cent, and is now stocked in 30 stores worldwide, including Saks and Neiman Marcus. Her best-selling piece continues to be her denim flares, but new beetroot-red pieces in her autumn collection are surging ahead.

In an industry obsessed with insiders, sometimes it’s the fringe members who have the real edge.