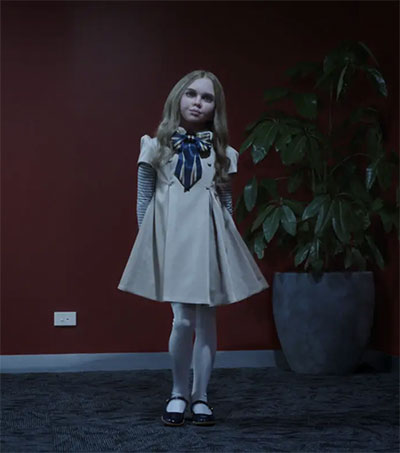 The titular star of the New Zealand-made horror film M3GAN, released last week in the US, had to try on several outfits before finding a signature look, Joshua Lyon reports for The New York Times.

M3GAN, who has wide eyes with long dark lashes and dirty blond hair that falls below her shoulders, wears the pussy-bow scarf with an inverted-pleat shift dress layered over a striped long-sleeve shirt, white stockings and shiny black Mary Janes, Lyon writes. Gerard Johnstone, the director of M3GAN, described the doll as having clothes that evoke the mod fashion of the 1960s and “long, flowing hair” like the “Mod Squad” actress Peggy Lipton.

The all-black look worn by M3GAN when viewers see her commit her first murder “was kind of a subversion of Little Red Riding Hood,” Johnstone said.

About 25 versions of the dress were produced by the film’s costume and wardrobe department. “They lasted through all of the dancing, all of the killing,” costume designer Daniel Cruden said.