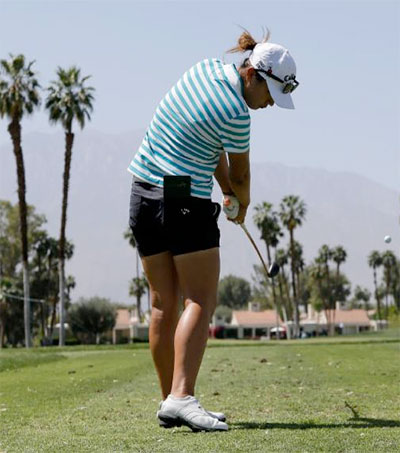 Few golfers have had better runs than the one that has swept New Zealander Lydia Ko, 17, to the top of the world rankings. She has entered the women’s first major, the ANA Inspiration at Mission Hills Country Club, with a string of 28 consecutive competitive rounds under par. It is one shy of the LPGA record held by Sweden’s Annika Sorenstam, a 10-time major winner.

“I am amazed how well Lydia is playing,” Sorenstam, a Golf Channel analyst, said. She added: “I watch her play and she’s just very consistent in every area. I think the strongest part is between her ears. She just has this composure about her, which she does so well under pressure.”

Born 11 days after Tiger Woods won the 1997 Masters for his first major title, Ko aspires to win her first major before turning 18 on 24 April. It is the only gap in her preternaturally grown-up résumé. With a victory Ko would supplant American Morgan Pressel as the youngest major winner in LPGA Tour history.

Ko’s perspective on the majors provides a window into her winsomeness.

“Everyone says, ‘Oh, you’re going to be the youngest winner in a major’ and all that,’” Ko said. “But to me, it’s more important that I have fun playing the majors and I play more consistently in them. That’s been my goal, because, you know, if I play consistently and get used to playing these great tournaments, I think that it will give me a better chance of hopefully being around the lead rather than my goal being, ‘I want to win this major.’”