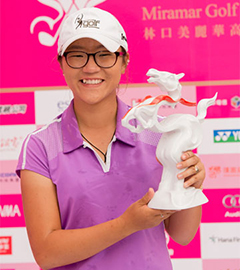 Lydia Ko Rises to Fourth in the World Ranking

After her first win as a professional, kiwi teenager Lydia Ko has moved up two places to number four in the world rankings.

Over the weekend she won the Swinging Skirts World Ladies Masters US$800,000 event in Taiwan.

“I’m really surprised,” she said after walking off the final green.

“I didn’t really have this coming. I think playing in the CME two weeks ago definitely helped me with all the nerves.”

The Aucklander said she felt the butterflies before the final round, when she trailed overnight leader Ryu So-yeon of South Korea by a stroke, but she told herself just to concentrate on her game.

The 16-year-old will begin her 2014 campaign at the Bahamas Classic from January 23 – 26, where she must attend a mandatory rookie’s session, before she will return home to defend her title at the ISPS Handa New Zealand Women’s Open in Christchurch from January 31 – February 2.