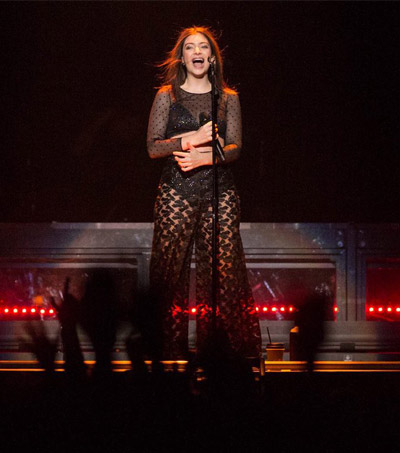 Lorde’s Portland Performance “As Intimate as Her Dinner Table”

“Maybe she even gave Portland a little extra love. In a long speech during the middle of her performance at the Moda Center Saturday night, she mentioned that both her assistant and tour photographer are from the city.”

“Part of this intimacy was her choice of openers for the tour: Swedish pop artist Tove Styrke and hip-hop duo Run the Jewels. While Styrke provided a bubbly and synth-pop filled performance, including a cover of Lorde’s “Liability,” Run The Jewels ran through a profane and energetic performance,” according to the article.

“Known for mixing an emotional vocal delivery and poetic songwriting with intricate and heavy pop, Lorde, it seems, has been destined to play arena tours. Her emotional and nuanced delivery poses her in a different light than contemporaries like Taylor Swift, though. David Bowie called her the future of music,” writes Davies.

“Rather than focus on visual gimmicks and a variety of costume changes, the tour delivers a stark stage setting for the artist. Her dancers often spent time suspended in a glass box in the air. Her first costume change was on stage where she shed the transparent jumpsuit and wrapped a pink skirt around her waist.”

“These visuals fit well with the sense of vulnerability Lorde carries as an artist, especially with an album as intense as Melodrama,” reports the article.