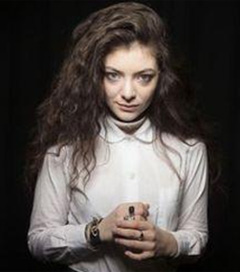 Lorde is “The Upstart” in NYT’s 2013 Disrupters

Auckland’s Lorde is one of the New York Times’ cultural Disruptors of 2013 – people who broke the rules in a year of artistic upheavals. She features alongside pop provocateur Miley Cyrus and rising actor Michael B. Jordan. Her single “Royals,” which has sold close to 4 million tracks, was at the top spot on Billboard’s Hot 100 chart for nine weeks. The chief popular music critic of the Tomes Jon Pareles writes:

“A flourishing teen-pop industry thinks it knows what teenagers care about: crushes, breakups, clothes, parties, perhaps an occasional glimmer of rebellion or idealism. It dispenses songs that are calculated to suit that market. But in 2013, a songwriter who is an actual teenager emerged from the far side of the planet with something smarter and deeper: a class-conscious critique of pop-culture materialism that’s so irresistible it became a No. 1 pop single.

“That teenager, now 17, is Ella Yelich-O’Connor, from the suburbs of Auckland, New Zealand, who records as Lorde. In her hit “Royals,” she sings about middle-class kids bombarded by music-video fantasies of bling and luxury but responding, “That kind of luxe just ain’t for us.” It’s palatial-sounding pop that doesn’t condescend to listeners of any age. The song and her debut album brought Lorde four Grammy nominations — including song of the year — although she was inexplicably denied a fifth, for best new artist.

“Lorde’s lyrics touch on suburban boredom, peer pressure, drinking, getting snubbed and how “maybe the Internet raised us.” It has no simple love songs, a deliberate choice: “Some people love writing about that, and that’s fine. But I personally haven’t found a way to do it yet which is innovative and feels new to me.”

“Her message is “about strength and about power,” she said. “I would like them to think that the sky’s the limit, that there’s really not anything you can’t do. After all, I’m from New Zealand. This shouldn’t happen to people like me.”