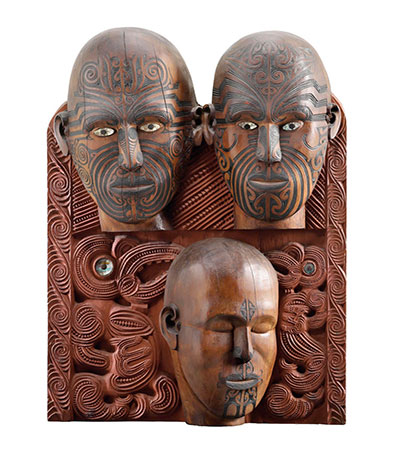 The new Oceania exhibition has just opened at London’s Royal Academy of Arts. The Guardian’s art reviewer Jonathan Jones was there, deeming the show “dazzling … like having the ocean roll under your canoe”, and awarding it five out five stars.

“It was the European modernists, of course, who got all the wealth and fame while their collections of Oceanian art went down in art history as troves of ‘raw material’ for their supposedly unprecedented ideas,” Jones writes. “Wandering through the Royal Academy’s intoxicating forest of sculpted symbols from the Pacific, I am inclined to see the whole thing more bluntly. It wasn’t a coincidence that Picasso saw like an Oceanian. This dazzling exhibition is full of the art the fathers of modernism ripped off.

“Oceanian art was, in fact, seen in Europe a long time before that of central Africa. Its first European collectors were James Cook and the scientists and artists he took on his epochal voyages of discovery.

“One reason that Cook and his chief scientist, Joseph Banks, were able to negotiate many of their meetings happily was through the mediation of Tupaia, a high priest they met in Tahiti who not only helped Banks understand its customs but sailed on as a translator.

“Tupaia also made faithful drawings of Pacific costumes and ceremonies. His watercolour here of a Chief Mourner of Tahiti wearing a mask made of two metallic-looking discs that create a lunar abstract effect dates from 1769. Near it is a real Chief Mourner’s costume from the 18th century – and it does indeed have those lunar discs. Magically they are made of glistening pearl shells.

“In this exhibition you can feel the ocean roll under your canoe, hear sea birds and see dorsal fins. The Royal Academy helps by painting some of the rooms ocean blue. Long before Cook explored the vastness of the Pacific, its indigenous peoples did. The very existence of the art here is a monument to one of humanity’s greatest and earliest acts of exploration.”

Oceania is on until 10 December. The exhibition is free for New Zealand and Pacific Island passport holders.