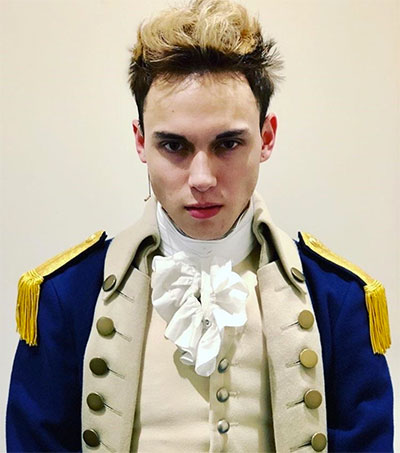 No cultural phenomenon has resonated more loudly in these politically turbulent times than the phenomenally successful Hamilton, which since 2015 has been selling out Broadway, Chicago and the West End, as well as multiple tours, according to Steven MacKenzie writing for London’s street newspaper, The Big Issue.

Bowman’s favourite line in the production is ‘Immigrants, we get the job done’.

“It always gets a reaction every night,” Bowman says.

“It is incredible for us to say that because there are so many immigrants in our cast, me being one of them. And to own that line is something that we’re very proud of,” he says.

Like many in the cast, Bowman has overcome his own obstacles to get into the spotlight. At 15, he was awarded a scholarship to Laine Theatre Arts in London. The problem was he lived in Wellington and couldn’t afford the trip over. So he took to the streets to busk his way to London and seven years later is part of the biggest production in the West End.

Bowman believes part of what makes the London production distinctive is down to the issues on stage being reflected by the experiences of the audience.

“It shows that a musical is so much more than a little song and dance on stage,” he continues. “This show is changing people’s lives and we see it.”