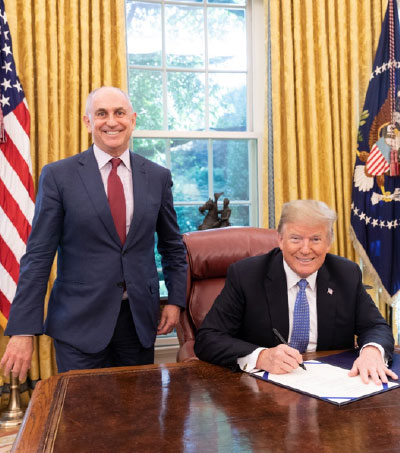 A bill has been signed by U.S. President Donald Trump that is intended to make it easier for New Zealanders and Americans to trade with and invest with each other. President Trump is pictured here in the Oval office at the signing with New Zealand-born Chris Liddell, Deputy Chief of Staff at the White House for Policy Coordination.

The American Chamber of Commerce in New Zealand reports that the passage of the Knowledgeable Innovators and Worthy Investors (KIWI) Act, comes as the United States and New Zealand marks a milestone 75 years of diplomatic relations. The bill will allow New Zealand citizens to apply for trade (E-1) and investor (E-2) temporary entry visas.

“New Zealand is one of our nation’s important strategic and economic partners. New Zealand is a member of the Five Eyes intelligence sharing alliance together with the U.S., United Kingdom, Canada and Australia and is the only member of the alliance whose citizens are not eligible to apply for E-1 and E-2 visas. Total foreign direct investment from New Zealand to the United States is valued at over half a billion dollars. However, New Zealand businesses have found that the lack of access to E-1 and E-2 visas has hampered their ability to increase trade and investment in the United States. By allowing New Zealanders to apply for these visas, the KIWI Act aims to expand business and investment opportunities between the two nations.” 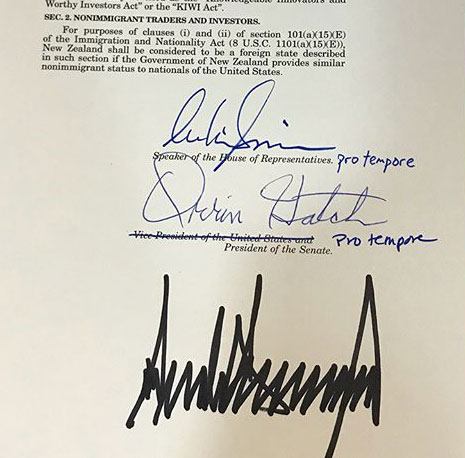 “We are delighted that Congress has passed the KIWI Act,” New Zealand’s Ambassador to the United States Tim Groser said. “The bill will make it easier for New Zealanders to grow and expand their businesses in the U.S., helping to strengthen our two economies and to deepen our bilateral relationship. We would like to thank all who supported the KIWI Act, and in particular to acknowledge the work of Senators Mazie Hirono and Mike Lee as well as Chairman Grassley in the Senate and Representatives Darrell Issa, Kevin Brady, and Rick Larsen as well as Chairman Goodlatte in the House for their collective effort to advance this important piece of legislation.”

Rep. Rick Larsen (WA-02), the Chair of the Friends of New Zealand Caucus, said in a statement on the House passage of the Knowledgeable Innovators and Worthy Investors (KIWI) Act, “New Zealand is an important friend and partner of the United States. By passing the KIWI Act, Congress ensures our immigration policy reflects the value and importance of this relationship,” said Larsen. “Enabling New Zealand businesses and investors to access nonimmigrant visas will better facilitate trade and investment and help local economies across the U.S.”
The text of the bill follows.

From the Congressional Record, Volume 164 (2018)
H.R. 3324–A bill to include New Zealand in the list of foreign states whose nationals are eligible for admission into the United States as E-1 and E-2 nonimmigrants if United States nationals are treated similarly by the Government of New Zealand; to the Committee on the Judiciary.

The bill principally concerns itself with the subjects of Oceania, New Zealand, Immigration status and procedures, U.S. and foreign investments, Visas and passports and Immigration.

The bipartisan bill was authored by Senators Mazie K. Hirono (D-Hawaii) and Mike Lee (R-Utah) to extend trade and investor visas to New Zealand citizens to increase international business between the United States and New Zealand.

The KIWI Bill was sponsored by Rep. Issa Darrell, a Republican representing the Californian 49th District which covers San Diego County and a small portion of southern Orange County. Rep. Darrell is Chairman of the Committee on Oversight and Government Reform

Phil Houlding, a trade and economic counsellor at the New Zealand Embassy in Washington, DC, said in July 2017 when the bill when the KIWI Bill was introduced into the House of Representatives, “This is the first step to bringing more Kiwi investors to the U.S., building bilateral ties, and creating jobs in the U.S. and NZ.”