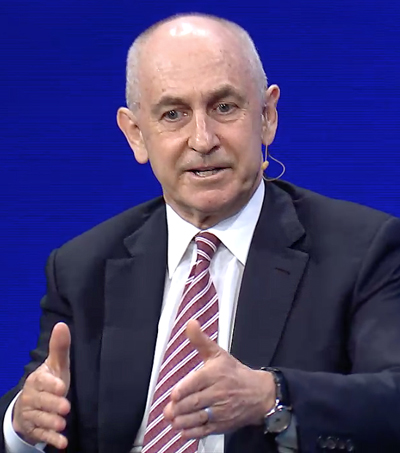 The U.S. government has a critical role in working with the private sector to harness emergent technologies such as 5G, quantum computing, AI, advanced manufacturing and synthetic biology, says Chris Liddell, White House Deputy Chief of Staff for Policy Coordination.

Speaking at the Milken Institute global conference in California on April 29, Liddell said that government data assets provide the foundation of what it can offer the private sector. “Unleashing government data is critical to encouraging innovation, an obvious example being GPS. When we let GPS out, look at what happened. The government has massive repositories of data. When we think about healthcare, which is the biggest industry in the country and also the most inefficient, there are massive amounts of data that we can unleash to improve and inform healthcare companies. Data is probably the biggest asset we can contribute.”

Elaborating on the topic of investment in future technology, Liddell detailed how the government can facilitate jobs in a tech-focused world. “In the long term, winning in the industries of the future is going to be critical to the prosperity of the country. China and the U.S. spend about the same on R&D, about $500 billion annually. In the U.S. about 150 of that is government and 350 of it is private sector, so making that system work relative to the 500 in China – which is more top down – is critical. Thinking about the 150 billion dollars that the government spends, it should be directed where there are areas of market failure inside the private sector, so we shouldn’t be replicate what the private sector is doing, we should be working on the areas where there is no obvious economic return in the short term, like quantum computing, which will unleash innovation in due course when there is an economic model that the private sector can pick up.

“When you think about the global race in the industries of the future, thinking about how we maximize a blended approach by unleashing innovation in the private sector is clearly going to be one of the most important things we do from a policy point of view. It is not just what the government does itself, it is what it does to unleash people in the private sector to do what they do. That is a much more successful model in an exponential environment than a top down one.”
Liddell said that shared prosperity was a key outcome. “We’ve done a great job over the last 30- or 40-years driving GDP growth, but we haven’t done a particularly good job of actually seeing everyone shares the benefits of that. We won’t win the industries of the future unless we actually build the workforce of the future. We need innovation at every aspect of the education system. We need to reimagine what education means and start thinking about it as lifelong learning so that it is not just an episodic event and then you go off into the workforce.”

Liddell questioned the accreditation system for two- and four-year degrees in the U.S. education system. “We’ve convinced people that the only way you are going to succeed is by having a college degree, and that can’t make any sense in the rapidly changing world that we’re in. The statistics are pretty damning: the percentage of people that graduate with 4-year degrees within 6 years is 65%, so a third of people don’t finish 4-year degrees. For 2-year degrees, a third of the people graduate, two thirds don’t. So bizarrely, we are forcing more people into the system and we are graduating less than we were 20 years ago. We must rethink that. Part of that is going to be driving towards vocational education – reorienting the money and the policies into more vocational aspects.”

According to Liddell, executives need to rethink the way in which they view their workforce and invest in education. “I was CFO of several companies and one thing I ask all CFOs now when I meet them is “how much do you spend on training?” Generally speaking, the answer is “I don’t know.” We can tell you to the dollar what we spend on healthcare and other things, but training isn’t a line item that most companies traditionally focus on. To the extent that they can answer it, it is usually about $500 per-person per-year, and it is oriented more towards the senior people than the lower levels. That can’t make sense. The whole system needs a massive amount of innovation that will be facilitated by the government but through partnerships with the private sector.

Chris Liddell grew up in the Waikato and Auckland. He is a graduate of Auckland and Oxford universities, and was CEO of Carter Holt Harvey in New Zealand before taking CFO roles at International Paper, Microsoft and General Motors.