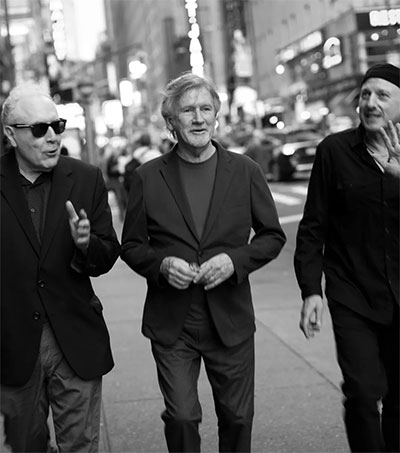 “When listening to [New York Notes], you may imagine that your ears have become just a little sharper. That’s how hearing Alan Broadbent’s piano playing often strikes me anyway,” UK jazz critic Dave Gelly writes in a Guardian review of the New Zealand musician’s latest album. “It’s because of the briskness and clarity of his technique, of course, but also the rhythmic suppleness. It’s hard to describe this without seeming hideously pretentious, but it’s real nonetheless. The bubbling stream of notes is both unpredictable and inevitable, and following its twists and turns is a joy.”

“If this album sounds especially ear-sharpening, that may be because Broadbent [pictured centre] is playing his own piano, in his home studio, with two of his closest musical friends: bassist Harvie S and drummer Billy Mintz,” Gelly writes. “The style is mainly classic bebop, which hasn’t changed in its essentials since Charlie Parker and his pianist contemporary, Bud Powell. There’s a gorgeous ballad too (I Fall in Love Too Easily), packed with so much fine detail I can’t stop playing it.

“Broadbent is also a composer, arranger, conductor and the double Grammy-winning creator of orchestral accompaniments for singers, from Natalie Cole to Paul McCartney. Why he isn’t among the world’s most famous musicians beats me.”

Auckland-born Broadbent, 72, is a graduate of Boston’s Berklee College of Music. In 2008, he was appointed a Member of the New Zealand Order of Merit for services to jazz