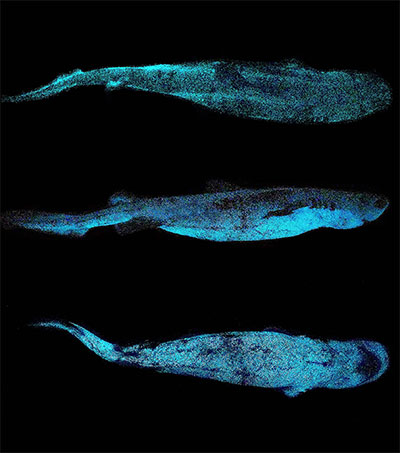 During a month-long expedition in waters off the coast of New Zealand, researchers identified the largest glow-in-the-dark species with a spine – on land or sea – that has ever been found, the kitefin shark, Lesley Evans Ogden reports for The New York Times.

The study was led by Jérôme Mallefet at the Catholic University of Louvain in Belgium. His recent collaboration with researchers in New Zealand and at the National Institute of Water and Atmospheric Research (NIWA), piggybacked on an annual survey conducted off the New Zealand coast. That project trawled depths as far down as 792m to document numbers of hoki, a white-fleshed fish that supports New Zealand’s largest commercial fishery, Ogden writes for the Times.

As the survey netted fish, Mallefet and colleagues would scan the catch for sharks, which were able to survive the drastic pressure change because of their lack of swim bladders. Live sharks were transferred to tanks in a dark, cold room where the team photographed them, including the kitefin shark’s spectacular luminosity.

Chemical tests showed that shark light is regulated by the hormone melatonin.

“It makes us fall asleep,” Mallefet said, “but it’s lighting up the shark.”