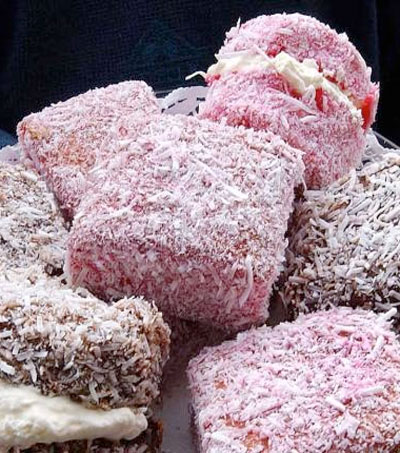 Lamingtons Are Ours Beyond Doubt

Lamingtons are definitively of New Zealand origin, with an 1888 watercolour painting by New Zealand landscape artist JR Smythe showing that the coconut covered cake is not really Australian and only an imitation of the earlier “Wellington”, according to research published by the University of Auckland.

Fresh analysis of a collection of 19th-century watercolours by Smythe, shows that in “Summer Pantry”, a partially eaten Lamington cake is clearly visible on the counter of a cottage overlooking Wellington Harbour.

The first known reference to a Lamington before this was a recipe published in 1902 in the Queensland Country Life newspaper. Historians had believed the Lamington was named after Lord Lamington who served as governor of Queensland between 1896-1901.

But experts at the University of Auckland have examined archives which show records of a visit Lamington undertook to Wellington in 1895, before beginning in his tenure as Queensland governor.

According to a New Zealand Herald news report of the visit, Lamington was “much taken with the local sweets provided him by local bakers A.R. Levin.”

Among those sweets, the article states, was a “Wellington – a double sponge dessert, dressed in shavings of coconut intended to imitate the snow capped mountains of New Zealand.”

Dr Arun Silva of the centre for academic knowledge, excellence and study at the University of Auckland, said the news clipping and Smythe watercolour made it “inconceivable” that the Lamington was an Australian invention.