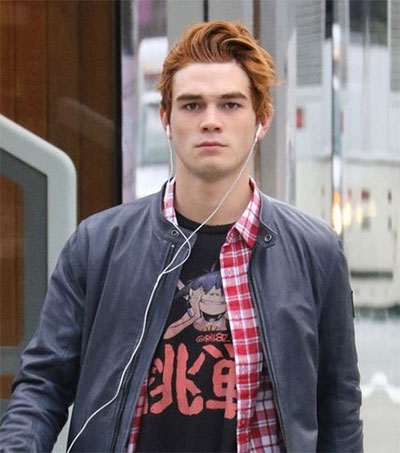 And Riverdale is notably darker from the original comic book, which first introduced the characters in 1941. Between the brooding glances in the trailers and Jason’s dead body found in the water, there’s a lot more to this, river than someone with even a casual knowledge of the comic might think. Gone is the wholesome story of teenage Americana; in its place is an hour-long drama that feels very Gossip Girl meets Twin Peaks.

Of the murder mystery, Apa, 19, says that “it adds a lot to the subversity and the darkness of the show because it’s so different from what people are used to reading in the comics. It’s a rude awakening – it’s going to be for a lot of the fans, and I think it adds a lot more interest to the show.”

Though the actor is a relatively new name stateside, he got his start acting a few years ago, after his mum signed him with a modelling agency. Apa says he “never got any work,” but things changed when he auditioned for Shortland Street, a nightly soap opera that has been on the air since 1992. On it, he played Kane Jenkins, a teen who would come to have more in common with Archie than the actor would know.

“My character had gotten into a relationship with his PE teacher so I literally had just played a similar storyline,” he says of Kane’s arc.

But there’s more to the show than the reboot’s twists that are new to Apa, who admits not knowing a lot about the comics when he went into the audition process. While it’s nearly impossible to escape the mythology of other comic book characters, Archie’s relative every-kid persona offered a lot more in terms of a blank slate.