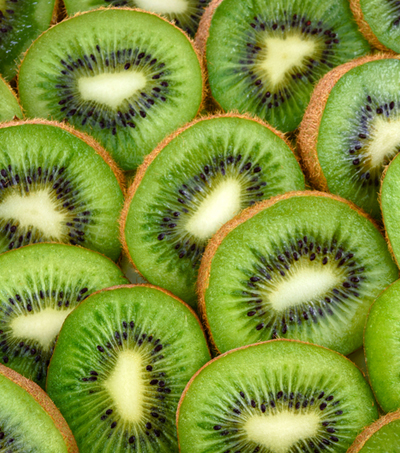 New York “first embraced global ingredients in the early ’80s, and the rest of the world followed suit.” And the “Kiwi was the gateway drug,” writes Ligaya Mishan in an article for The New York Times.

Native to southern China the fruit, “first started coming in bulk to the U.S. via New Zealand in the 1950s under the name ‘Chinese gooseberry.’” It gained popularity only after it was rechristened in honor of the equally fuzzy kiwi bird in the early 80s. By that time it began to appear “with merciless persistence at restaurants across Manhattan, in tart after tart, fruit salads, compotes and even savory dishes, lending an algal tinge to beurre blanc,” reports the article.

“By 1983, it was stocked in every supermarket and featured in recipes on the back of cake-mix boxes. The New York Times declared it passé.” But “it had served its purpose, opening eyes and palates to fruit of all colors, shapes and textures, beyond the familiar apples, oranges and bananas.”

None of the kiwi’s “cohorts would go on to receive the same kind of cultish adoration,” writes Mishan, “but together these fruits achieved something at once ordinary and radical: They became part of the cityscape, as if they’d always been here, as if New York — and then America — couldn’t exist without them.”

“There was a dark side to this bounty. The new produce didn’t come cheap,” writes Mishan. While “caring about what you put in your body had been primarily a countercultural concern” in the ‘60s and 70s’, “the kind of artisanal ingredients long celebrated on the Pacific Coast by activist chefs like Alice Waters” now “were being embraced by New Yorkers.”

“This turn inward, away from public life to private, was due in part to the economic boom presided over by Ronald Reagan — people finally had the money to splurge on radicchio flown in from Italy and crème fraîche from France. What had been political choices became personal luxuries: The revolution was here, and it was salad.”

“But not every flavor beloved in the trickle-down years has retained its aura; some, particularly those associated with nouvelle cuisine, quickly soured,” writes Mishan.

“Still, something of that early ’80s restive spirit has stayed with us. During the breakdown of the ’70s, families with means fled to the suburbs in even greater numbers than their ’50s and ’60s forebears.”

“And while the Patrick Batemans fought to land tables at the Odeon and the Quilted Giraffe, any citizen, rich or poor, could walk down the street and meet the world.”

“As Reagan was championing free trade, New Yorkers were living it. The world had come to the curb and to the corner bodega, and we were ready to eat it up.”