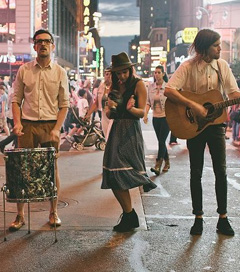 New Zealand band, Streets of Laredo, have taken a top spot in the US indie music competition, Unsigned Only. The New York-based band, made up of brothers Dan and Dave Gibson, and Dave’s wife, Sarah, and Si Moore, took the Adult Album Alternative category.

Competition founders, Candace Avery and Jim Morgan said Streets of Laredo’s winning song Girlfriend was “especially impressive” and had scored the band a unanimous victory in their category.

“They encompass everything that should make a major label take notice and sign them now – before someone else does. They are that good.”

In a press release, Unsigned Only said that, “In a country brimming with talent, Streets of Laredo stand out for their indie folk sound that is completely current yet timeless.”

“Their winning song, Girlfriend is infectious, catchy, and creative, and they might just be the next big thing to come out of New Zealand, following in the footsteps of Kimbra, Gin Wigmore, and Lorde.”

The group’s debated album was recently recorded in New Zealand.