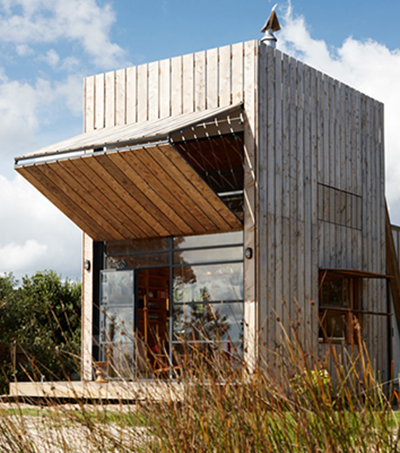 A small Kiwi-designed bach has won a prestigious award at a ceremony dubbed the “Oscars of architecture” in New York.

The “sled hut”, which measures a mere 40sq m over two storeys, sits on a beachfront section at Whangapoua on the Coromandel Peninsula.

It rests on two thick wooden sleds that allow it to be shifted around the beachfront section or removed altogether. The property lies on the coastal erosion zone, where all buildings must be removable or demountable.

Auckland firm Crosson Clarke Carnachan Architects came up with the sled house to adhere to the zone requirements.

They have been rewarded for their efforts with a coveted Architizer A+ gold award in the residential category for single family home under 1000sq ft (93sq m).

Architect Ken Crosson left for New York last night and will receive the award on Thursday.

Before he left Auckland he told the Herald he was “delighted” with the win.

Mr Crosson was approached by the owners of the property, a family of five. The owners wanted the bach to fit in with the sand dune setting and be appropriate for the landscape – much like a surf lifesaving tower.

The awards received more than 1500 entries from more than 100 countries and are judged by more than 200 industry and cultural leaders.

“The judges are rock stars of the architecture world … they are ‘star-chitects’ so it’s nice to be recognised by them,” Mr Crosson said.

Built from macrocarpa the bach is completely sustainable with a worm tank waste system, separate portable grey water tanks and an enormous shutter on the front that can be winched open to form an awning.

The hut has also won or been shortlisted for awards in New Zealand, Korea and London.