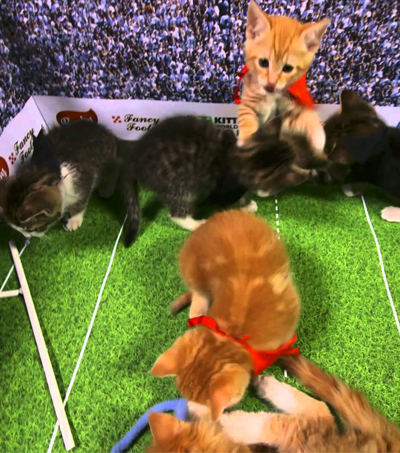 Kiwi comedy duo Jono and Ben have recreated the highlights of the New Zealand vs. France Rugby World Cup match in a video with a twist – their clip features kittens rather than rugby players.

“The hilarious video shows a claw-sharp competition taking place between the New Zealand ‘All-Cats’ and ‘Prance’ (France)”, writes Horia Ungureanu for the TechTimes.

“Not only are the fur balls delightful to witness in their own right, but the quirky comments from the comedians add to the effect”.

According to the article team Prance had the upper paw and better control of the mouse, but the “All Cats made a spectacular comeback thanks to the reflexes of its captain, Richie Mclaw”.

A wind-up tiny mouse served as the ball for the two cat teams.