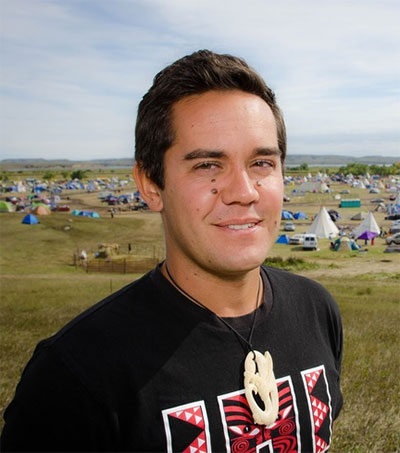 Lawyer Kingi Snelgar, 29, who has worked as a crown prosecutor in New Zealand and overseas as a human rights observer, joined the Standing Rock movement in South Dakota in late-2016. Snelgar, who completed his one-year LLM at Harvard, talks to Impolitikal’s Sarah Illingworth about protesting the Dakota Access Pipeline (DAPL).

Attended by more than 150 American Indian nations, the movement began last April, and sought to halt construction of the DAPL. Commissioned by the Texas-based company Energy Transfer Partners, the pipeline’s route crosses the sacred tribal lands of the Standing Rock Sioux Reservation, threatened not only the nation’s livelihoods, but the purity of their water – a vital resource.

Protesters secured a halt on construction on 4 December 2016, but the decision was subsequently reversed by US president Donald Trump in his first week of office.

“I finished my Masters and wanted to learn more about the way that sovereignty works for indigenous nations,” Snelgar explains. “They asked me to do a speech to the camp as a way to introduce myself, because I was Maori and I don’t think any Maori had been to the camp. Then they said, you’re a lawyer – you should come work with us on the legal team.

“With things like the courts not working, and it being difficult to make change through politics, it was refreshing to see that it’s still an option to gather. It’s not something that only happened in the 70s and 80s.

“[Meeting other indigenous groups at Standing Rock was as if] you’re the same people, but different. It’s so strange the similarities in experience across all indigenous nations. The colonial legacy – what happened, and what continues to happen. And then just things like humour. We have the same dry humour, we value the same kinds of things, like Mother Earth, and water. To go to Standing Rock to support Standing Rock people with their fight against the pipeline was just natural, and consistent with my upbringing.”

Snelgar was born in Whangarei.