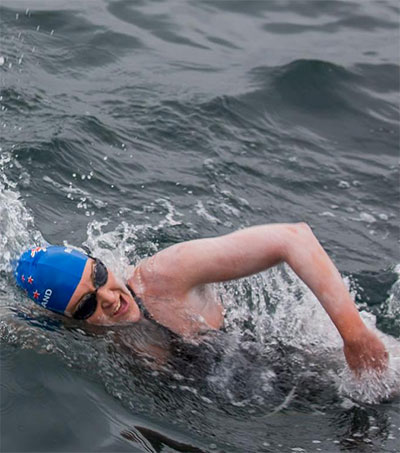 New Zealand’s Kim Chambers has become the first woman to swim the nearly 50km stretch from the Farallon Islands to the Golden Gate Bridge in a feat conquering one of the world’s most dangerous crossings.

Chambers, 38, a former ballerina and rower for UC Berkeley, dove into the cold water late on 7 August and passed under the San Francisco landmark about 17 hours later.

“I had my whole crew just giving me the thumbs up. I can see the bridge and when you can see that you know have to get there,” Chambers said. “I definitely had to dig really, really deep.”

She was followed by a boat carrying her mother and about 16 crew members who watched for dangers.

Four men have completed the Farallones to Golden Gate swim. The stretch of water is notorious for great white sharks that are attracted to elephant seals on the cluster of islands off the US coast.

She became the sixth person (and third woman) to complete the Ocean’s Seven, a collection of marathon swimming challenges, including the Strait of Gibraltar, the Molokai Channel in Hawaii, and the North Channel from northern Ireland to Scotland, where she endured hundreds of jellyfish stings during a 13-hour crossing.