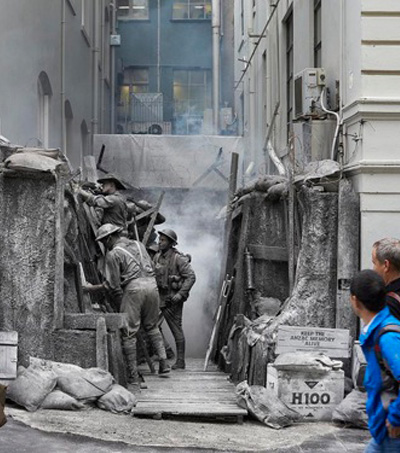 Tableau vivant installation The Unforgotten Soldiers has toured New Zealand as a tribute to the Australian and New Zealand Army Corps (ANZAC) soldiers, who fought 100 years ago in the Gallipoli campaign during World War One.

“This memorial is designed to bring as much relevance to this special occasion as possible and help Kiwis remember those who’ve given everything for their country,” says Shane Bradnick, DDB New Zeleand’s ECD.

“What better way to show what our heroes went through than by demonstrating it, live.”

The Unforgotten Soldiers has opened on Auckland’s Lorne Street on April 17 and has been performed on Wellington’s Civic Square on April 21 as well as at Christchurch’s Cashel Mall on April 22.

The project, which is performed in black and white, is a collaboration between Sky TV New Zealand, the History Channel, DDB New Zealand production company Will O’Rourke and Pete Baker, director at The Glue Society.

Footage of the live performances also has been aired on free-to-air and SKY channels on April 25.