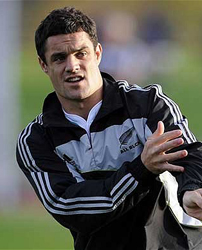 “The world’s best rugby player” Dan Carter talks exclusively to The Telegraph about how he fled for his own safety during last month’s earthquake in Christchurch, and about how he helped the city in the aftermath. “The New Zealand fly-half, who is in London with his Crusaders team-mates for the unique Super 15 game on March 27 at Twickenham, has talked of the fear, the sense of helplessness and his shock at witnessing scenes which will live with him always. Didn’t the sight of New Zealand’s sporting poster boy, their answer to David Beckham, rallying to the cause cheer his neighbours? ‘I don’t think they were surprised but I guess seeing us giving a helping hand was a bit of a morale booster. As All Blacks, we are kind of held on a pedestal here in a nation of rugby fanatics. So you’ve got to make sure people know that you’re just like everybody else, you’re just human, going through the same emotional roller-coaster. Just because you’re an All Black doesn’t mean you’re not going to get your hands dirty to help out when needed.’”