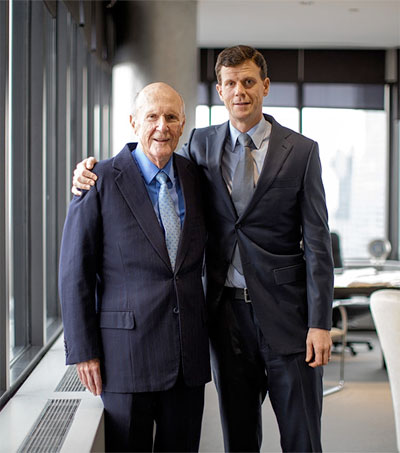 Billionaire Julian Robertson is renowned on Wall Street for being a pioneer in the hedge-fund industry in the 1980s and, more recently, for being a philanthropist who is giving much of his fortune away to causes in and outside New York. What’s less know is the role that a New Zealand real-estate investment has played in his career as well as in the life of one of his sons, 37-year-old Jay Robertson.

That investment today consists of 6000ha of first-rate land in New Zealand and three luxury hotels – the Kauri Cliffs, the Farm at Cape Kidnappers and Matakauri Lodge. Son Jay Robertson manages all three properties that include waterfalls, steep ravines and lush emerald hills.

Over the years, the Robertsons’ ties to New Zealand have gotten stronger. In 1995 Robertson bought a 2400-hectare property on the North Island, with grazing sheep, and panoramic vistas over the Pacific coast. The price was “the cost of a modest New York apartment,” he recalls.

Robertson says he didn’t encourage his sons to follow in his footsteps to Wall Street, but his youngest son Alex, 35, (pictured right) chose to go into the family business anyway and is currently a director at Tiger Management. His oldest son, Spencer, 40, is executive director of the Pave Academy charter school in Brooklyn.

But Jay Robertson chose the family firm in New Zealand. “I certainly never thought I would be in New Zealand for 11 years. It still hard for me to believe.” His wife is a New Zealander and he has one child.

Photo by Ramsay De Give.