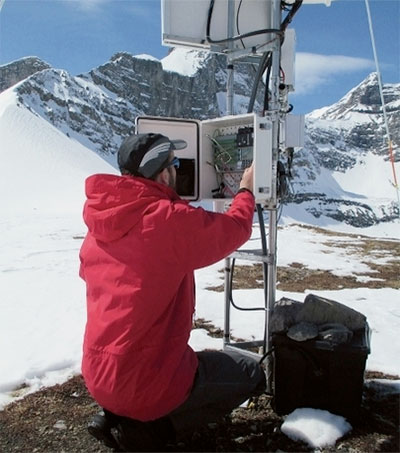 New Zealand scientist Jonathan Conway, who holds a PhD in glaciology and climatology from the University of Otago, is in the Canadian Rockies on a two-year posting at the University of Saskatchewan’s Centre for Hydrology, where he is comparing and contrasting topography and climate to New Zealand’s mountain environments.

Through his work at one of seven snow study sites on Fortress Mountain, Conway will contribute to the Changing Cold Regions Network, a nation-wide project that looks at changes in water resources through Western and Northern Canada. In particular, he’s aiming to provide better science to the models used to understand and forecast changes in mountainous regions.

“Nowadays, instruments like these [which measure temperature, relative humidity, wind speed and direction, among numerous more intricate functions] can stand up to the wind and snow,” Conway said. “We learn a lot about radiation and temperature and thermal energy. The Fortress site is ideal in this regard as it has such extreme topography and a range of surface cover.”