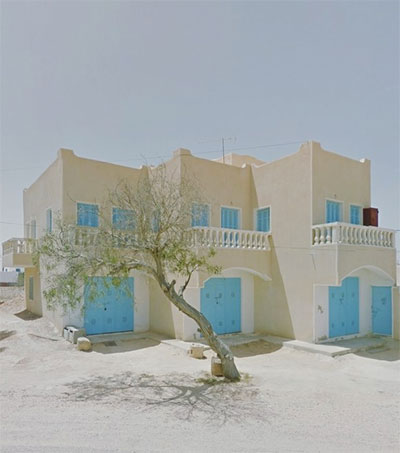 Kenny now posts photos from the collection on an Instagram account called Agoraphobic Traveller, a reference to another impetus behind the project: Kenny, who is friendly and witty in conversation, suffers from anxiety that, on a bad day, can make it difficult to leave the house. Contrary to a common misconception, agoraphobia is often less a fear of open spaces than it is a fear of losing control.

Sometimes, she has difficulty going to aisles of the grocery store that are too far from the exit, and getting on a plane is a huge ordeal. To go to her sister’s wedding, in New Zealand, she told the New Yorker, required months of therapy beforehand. The Street View project has become a way for Kenny to visit places that she could never go to herself – the more remote, the better, she said.

Many of the photos share a clear, wide blue sky and look as though they were taken through a sandy haze. At first scroll, it appears as though they all could have been shot in the same place; in fact, they span from Lima, Peru, and Sharjah, UAE, to Winslow, Arizona. Kenny – who doesn’t consider herself a real photographer but clearly has a very particular eye – is drawn to stark landscapes and orderly arrangements: the straight lines of a road receding into the distance; a tree in perfect butterfly symmetry with its shadow; identical boxy houses sitting in neat rows.

If you pay attention, you can begin to identify various regions by certain signature motifs – Mongolia by its horses, or Arizona by its round, topiaried trees in the middle of its gravel front yards. “I love a good cactus,” Kenny said, and it shows.