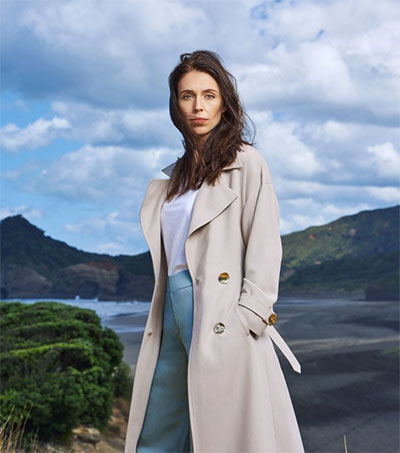 Jacinda Ardern is clear-eyed about what a prime minister of New Zealand, a country with a population of under five million, can achieve on the world stage. “We’re small,” she tells Amelia Lester reporting for American Vogue, “but we do our bit by standing up for what we believe in.”

She points to New Zealand’s long-standing nuclear-free policy as an example and wants to apply that same moral leadership to action on climate change. “We’re surrounded by island nations who will feel the brunt of climate change. So I see us as having a responsibility.”

Of course New Zealand is a tiny contributor, overall, to the warming planet – and yet carbon-heavy industries like farming, horticulture, and forestry are the country’s biggest businesses. Ardern is ready to take those sectors on. “The most difficult thing for us to do is to mitigate and offset our agricultural emissions,” she says. “If we find a way to do that, then we’re showing other countries how to do it too.”

A few days after our meeting, Ardern, along with Clarke Gayford, is hosting a Saturday-afternoon barbecue for Auckland’s Labour Party branch leaders at the local rugby league club. She is dressed casually but, as always, favours New Zealand brands: Andrea Moore pants, Allbirds shoes (“They look like men’s slippers,” she says, “but they’re comfortable!”). It’s a corker of a day, as a Kiwi might say – sunny and bright – and among the red tents set up on the football field are plates of seasonally appropriate mince pies, shortbread, and a fruitcake on which glacé cherries spell out labour. Ardern takes it upon herself to pass slices of it around, stage-whispering to three young girls in their volleyball uniforms that she doesn’t like fruitcake much either.

Fleetwood Mac’s “Gypsy” fades out and the chirping tui birds persist as Ardern takes the microphone. She thanks the party faithful for all their work over this momentous year and asks them to “reflect on how exciting it is we have this opportunity for change in New Zealand.”

Ardern has always maintained that she wants her brand of politics to be kinder – and you can feel that energy in the air, a kind of gracious optimism. “It’s going to take some time,” she says, “but in the meantime I hope people feel differently about their government.”