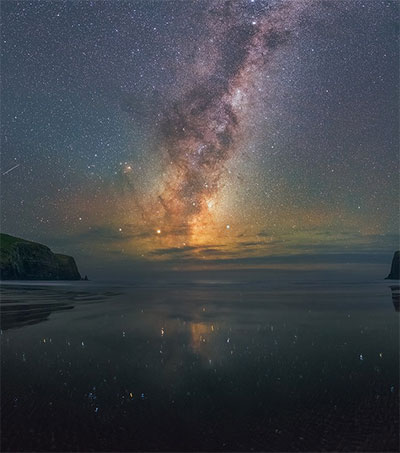 Insane View of Milky Way from Edge of NZ

The South Island spans 50,437sqkm of breathtaking, verdant terrain. But nothing on the ground surpasses what’s in the sky. The region is home to the largest dark sky observatory in the world, glittering with millions of stars and spectacular views of the Milky Way. Photographer Paul Wilson captured the galaxy in this incredible shot from Hickory Bay. WIRED magazine’s Laura Mallonee reports.

Wilson is an ardent stargazer.

He spends countless hours traveling to far-flung corners of the island to point his camera at the heavens. “New Zealand’s great with dark skies,” Wilson says. “If you get out of any city, you can see the Milky Way here.”

Wilson fell in love with the cosmos (and photography) four years ago, when some astrophotography friends encouraged him to give it a try. He now makes multiple long-exposure images, stitching them together to create one enormous photo sometimes more than 500 megapixels. Wilson typically shoots between February and November when the nights are longer, cross-referencing light pollution charts with Google Maps to locate the best stargazing spots.

It’s how he found Hickory Bay, about two hours south of Christchurch where he lives. “It’s very remote,” he says. “Once when I was out there, a farmer popped out in his underwear to ask what I was doing.”

He nabbed this particular shot of the bay on a still, clear night in February. It was about 3:30 am, the tide was going out, and the Milky Way was just beginning to rise in the eastern sky.

The final 113-megapixel photograph captures the galaxy shimmering above a tumbling shoreline and reflected in the dark water. It’s brighter and more detailed than what you’d see with the naked eye. But for Wilson, the real thing is no less magical. “When you’re under the Milky Way you feel really insignificant,” he says. “I’d hate to live somewhere I couldn’t see it.”