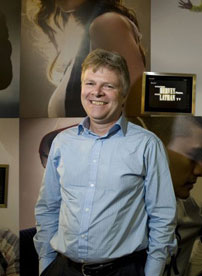 In Love With His TV

Chief executive of Virgin Media New Zealander Neil Berkett has been placed at number 52 on the MediaGuardian annual top 1 guide to the most powerful people in television, radio, newspapers, magazines, digital media, media business, advertising, marketing and PR. The Guardian profile reads: “Berkett has promised to ‘make people fall in love with their television sets again’ with Virgin Media’s next-generation video-on-demand service. Berkett led his cable company to a record three-month turnover of £1bn during the final quarter of 21, and was rewarded when the share price hit an all-time high. Berkett took over as chief executive in 28, having been chief operating officer at its predecessor company NTL from 25. A straight-talking New Zealander, Berkett’s focus this year will be Virgin Media’s superfast broadband offering and its video-on-demand offering backed by Tivo.” Facebook founder and chief executive Mark Zuckerberg took the top spot.