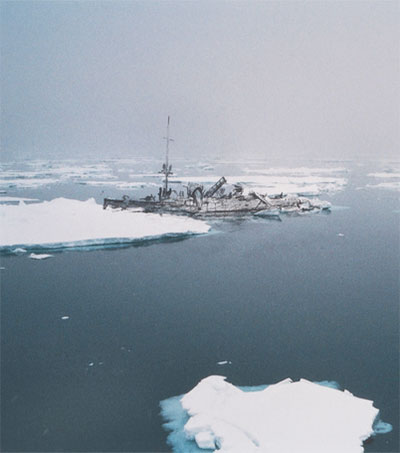 “North’s most recent series of artworks is beautiful, and technically perfect – in that, it’s perhaps the fullest realisation of the artist’s photographic language, developed over a long and exceptional career.

“ [A] sense of living under the shadow of impending crisis […] informs […] ‘East Antarctica 1915’, currently on show at Adelaide’s Greenaway Gallery until 26 April.

“In 2012 North travelled by ship to Antarctica on a voyage commemorating the centenary of Douglas Mawson’s Australasian Antarctica Expedition, taking photographs of that most remote region in Antarctica, using a medium format panoramic camera.

“‘East Antarctica 1915’ distills many of North’s previously rehearsed themes and artistic preoccupations – with an additional nod to the Great War, the bloodiest of our wars, and to the Anzac legend, involving Australia and North’s homeland, New Zealand.

“These beautifully made, contemplative images of exaltation and intensity, reflecting the infinite sadness of never-ending wars, fractured historical recollections, social entropy, continuing colonial conquest and exploitation, are underpinned by an overarching sense of psychological and even physical threat.

“In its evocation of beauty and terror, ‘East Antarctica 1915’ seems to sum up the era in which we find ourselves living.”

North is currently Adjunct Professor of Visual Arts at the University of Adelaide.