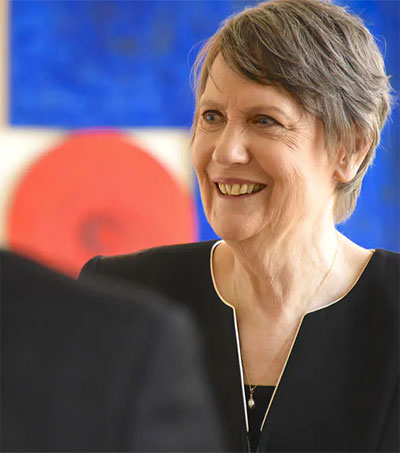 Helen Clark Film Reveals a Shadowy World at the UN

Filmmaker Gaylene Preston’s documentary My Year With Helen playing in Australia this month provides a happy and timely reminder that before there was Jacinda Ardern, there was Helen Clark.

The extraordinary post-parliamentary career of former New Zealand prime minister Clark is the subject of My Year With Helen. In it, Preston tells a story of leadership, patriarchy, women and power as she follows Clark into one of world’s most secretive – and significant – power processes, the one to be elected secretary general of the UN.

Clark’s pursuit of the position in 2016 was well known, but the precise mechanisms of her defeat in the shadowy, secretive realm of geopolitical horse-trading less so. Clark describes the film documenting her campaign as “fly on the wall”, but the revelation of its story is just how many more walls its other subjects are willing to erect. “It’s a bit of a thriller,” Clark tells the Guardian in an interview. “It’s the equivalent of the House of Cards of the UN. Metaphorically, candidates are [killed].”

Preston began trailing Clark in Botswana, where Clark was engaging a local government forum in her UN role. “A typical country visit,” Clark explains as if it may be the same for anyone, “I met the president, the key ministers, met with women – and went out to be engaged on some kind of mission.”

Yet the film finishes in Manhattan, where the documentary recorded the last six months of Clark’s campaign within a less accommodating environment. “I think that what does come out is the unreality of that bubble of life in New York,” Clark says of the process the film depicts, “which is governed by those who got their seats on the security council in 1945 before you and I were born.”

Despite inevitable leaks to journalists, there is, she says of her run for the role of UN secretary general, “Nothing transparent about it. Compare that to real life out there, real people, and the need they have of the UN for peace, security and development. And that’s quite a disconnect.”

Clark made it to fifth place in the sixth ballot before her own candidature was killed off. Watching the film, she suggests, one can make “an informed guess” as to who was responsible for that.

“I’ve been in public life for a long time, it goes with the territory,” she tells the newspaper, “you work out how much you want people to see, how much they can see, and what they can’t.” But ever the leader, ever the diplomat, ever the political intellect, Clark’s understanding of power remains expert, worldly and wry. “But a good filmmaker or reporter,” she says, “will work out what’s going on, without having to be told.”