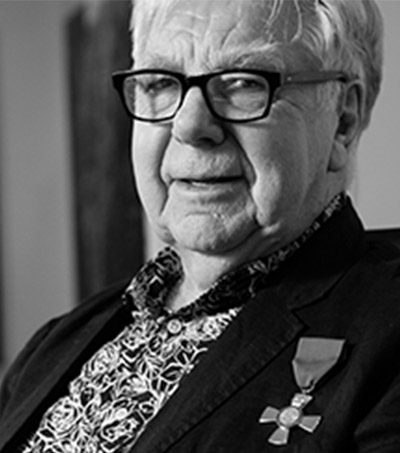 “In fact, it was heavenly,” said Grafton, Auckland-born New York artist Max Gimblett, 80, on being invested as Officer of the Order of Merit Award by Governor General Sir Jerry Matapere.

“I thought it would be a bit of a production line; we’d all shuffle in, shake hands, and that would be it,” Gimblett said about his expectations for the official ceremony. “When it was my turn, the Governor General leaned towards me and whispered kind and knowledgeable words to me. . . He talked generously and beautifully for three minutes or so about the work I had done to help others. I cried, shook his hand, and sat down.”

In a wide-ranging interview with Jenny Rudd of UNO, the quarterly regional lifestyle magazine, Gimblett discusses returning home from New York to receive the ONZM Award from the Governor General, his Buddhist philosophy, the importance of the quatrefoil pattern, and why he’ll always be a true Kiwi son.

Hearing this visual artist speak is a special treat, writes Rudd. “His vernacular, tone, and accent switch from the poise and elegance of a New York artist, to the rounded informality of a kiwi boy and to the soft, intuitive language of someone keenly in touch with their own spirituality. Everything is punctuated by hearty chuckles.” Gimblett reminisces about being a teenager driving down to Mount Maunganui from Auckland to see Bill Haley and His Comets. 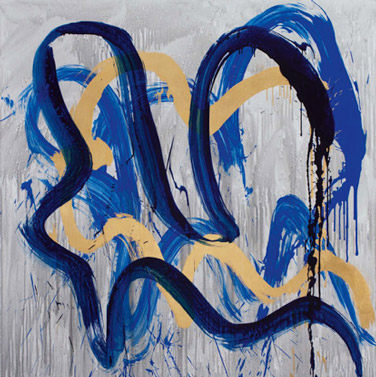 Gimblett became a U.S. citizen in 1979, seven years after he moved to New York. “I believe you should live in a country you can vote in,” he explained. “However, I also believe we are strongest in the country of our birth. There are some street corners in Auckland on which I feel invincible.”

Today, Gimblett is perhaps best known for his quatrefoil paintings. An ancient form that takes the shape of four circles intersecting at the same point, the quatrefoil has become an important component of Gimblett’s art over the last two decades as he has attempted to break away from the traditional picture plane. The story of what led the artist to embrace the shape ties in with the core of Gimblett’s life: spirituality.

A Buddhist monk, Gimblett meditates every morning at dawn, sitting before a blank wall. “After a while, faces appear in front of you,” he explained. “They may look like God but they are all projections of masks. We all wear masks. In removing all masks, we recognize the fact that we are a being. Not a human. Just a being. Death is just like taking off a coat. I have no fear of it.” Gimblett relates how he “struggled along for about twenty years or so” before he began achieving more critical and commercial recognition in 1983. This came “after I had a dream in which a quatrefoil appeared and spoke to me, ‘Paint me and I will heal you.’”

“I go into a mystical state of not knowing and doubt, wandering around doing lots of things to lots of different works,” Gimblett said, describing his work process. “When I’m painting, I execute ‘All Mind, No Mind,’ the title of one of my exhibitions. The energy must flow through the arm to the brush and it takes some practice to remove all thoughts from every corner possible: meat pies, Bill Haley and His Comets, everything. It’s a great relief to be out of the mind.” 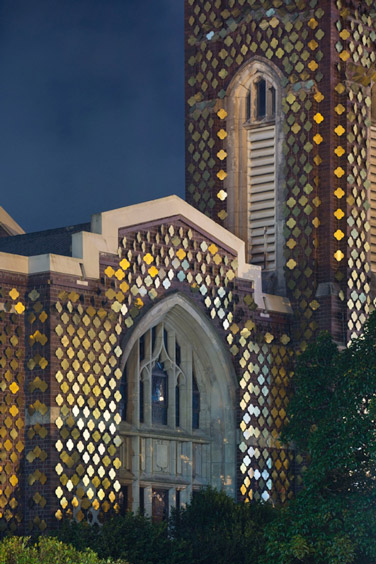 In 2015 Gimblett completed “The Art of Remembrance,” an ANZAC Day commemorative project with St. David’s Church in Grafton, Auckland that saw the religious center covered in thousands of small, bronze, hand-printed quatrefoils.  The project was headed by Paul Baragwanath of the Friends of St David’s, a group raising funds to save and restore the unique heritage building.

“The Art of Remembrance” is to be unveiled at Te Papa Tongarewa, The Museum of New Zealand, Wellington, on the 16th of March. This exhibition of several hundred of the Max Gimblett Remembrance artworks will be on display inside Te Papa, at the entrance to the Art Gallery section of the Museum. It will be on view for three months, including over the ANZAC period.

GowLangsford Gallery in Auckland is currently exhibiting “One Day in the Afternoon of the Gods” at both their Lorne St and Kitchener St galleries. To celebrate the artist’s 80th birthday, GowLangsford have published a book From Grafton to the Guggenheim. An extract from the Introduction by Anna Jackson follows:

“If there is one thing you can be certain of when meeting Max Gimblett, it’s that you are unlikely to forget it. Everyone has a “Max” story. 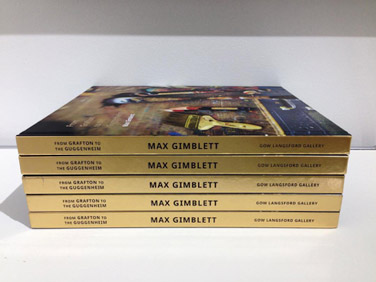 “Max is an unusual blend of contradictions: he tears up sentimentally as frequently as he raises his voice, he is both reticent and animated, and has that increasingly inappropriate old-boy humour that you can’t help but find amusing. He is both impulsive and measured and, at his age, you respect his energy although it clearly surges. The faded scent of Old Spice follows him as does his growing following of art admirers. A self-professed Buddhist of Presbyterian upbringing, an American New Zealander, a Kiwi Yank, a painter, ceramicist, printmaker, leader and collaborator; Gimblett is an open book albeit a complex one to read.

“He talks about his work with abandon and is a natural-born story teller. His charisma is a tonic that drinks you in before you wonder if he is having you on. His nature is strangely compelling, yet if there is one thing that defines Max, for me, it is not his uber-personality but it is his generosity.  He is infinitely giving – his spirit is open and he is generous with his time and thoughts.  He has made major donations to both public institutions and to grassroots organisations throughout New Zealand, and his paintings created using his now-famous all mind-no mind approach, are generous expressions of the artist himself.” 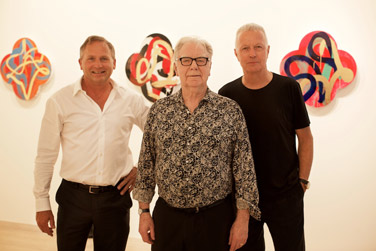