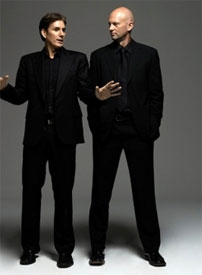 Christchurch-born baritone Teddy Tahu Rhodes (right) performs with Australian David Hobson at the Perth Concert Hall on 29 October as part of their “encore” national tour. During a lunch where the conversation ranged from singing to audiences, sport and music and of course opera, the two friends foreshadowed their concert tour, explaining the 2009 tour had been so popular they decided to do it again — but with a different repertoire. As Hobson said: “It’s an encore performance. It will be the same but different.” Rhodes: “It will be older.” Hobson: “It’s a vehicle for our talents and things we love doing and things we love doing together. We obviously have totally different voices. Ted’s a very, very beautiful dark baritone and I’m a really light lyric tenor. So the contrast is there.” In 2008 Rhodes received a Laureate Award from the Arts Foundation of New Zealand.